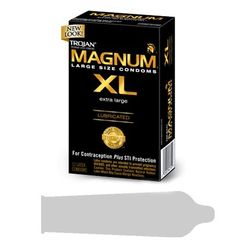 Trojan Brand Magnum XL Condoms 12 Pack. Magnum XL Latex Condoms are intended for men who feel that current regular and large size condoms are too small. Other men may experience slippage with this extra large size condom. The gold standard in comfort and protection. When even a large size condom proves to be a little snug, those with bigger-than-average erections will enjoy these Magnum XL condoms from Trojan. One of the largest sizes available on the market, they won't pinch or constrict bigger erections the way conventional condoms may. Lubricated for a more sensual feel, both you and your partner can relax knowing each condom is electronically tested to provide superior protection against STDs and pregnancy. Color: Translucent. Type: Condom. Pack: 12. Special Features: Lubricated, Extra Large Size. A condom is a barrier device most commonly used during sexual intercourse to reduce the probability of pregnancy and spreading sexually transmitted diseases, STDs such as gonorrhea, syphilis, and HIV. It is put on a man's erect penis and physically blocks ejaculated semen from entering the body of a sexual partner. Because condoms are waterproof, elastic, and durable, they are also used in a variety of secondary applications. These include collection of semen for use in infertility treatment as well as non-sexual uses such as creating waterproof microphones and protecting rifle barrels from clogging. Safe sex practice, birth control, disease prevention, pregnancy prevent. Always practice safe sex. Trojan Brand Magnum XL Latex Condoms from Paradise Marketing. New image added April 14, 2012.